Recent graduates of Auburn’s Master of Landscape Architecture (MLA) program created an exhibit for one of the longest-running horticulture events in the nation, the PHS Philadelphia Flower Show.

The MLA team collaborated with Auburn Alumna, Abra Lee, founder of Conquer The Soil and researcher in Black garden history. Their exhibit memorialized Effie Lee Newsome, a Black poet from the Harlem Renaissance who spent time in Birmingham and Philadelphia. 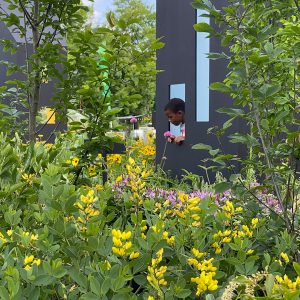 By April, they narrowed their design to  creating viewpoints that would highlight particular lines of Newsome’s poetry. The viewpoints were created by constructing sheds that attendees could walk into, and a window would focus their gaze on a specific section of the exhibit. This section would include signage of Newsome’s lines of poetry and plants that would correspond with her writing.

“In essence, this is a naturalist poet writing in the 20th century for African American children who may be growing up in an environment where they don’t feel like they’re accepted or belong,” Trae Waston said. “She’s showing a way that nature can create an intimate relationship for the purpose of self-esteem.” 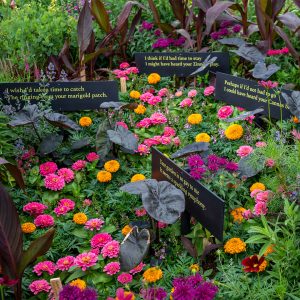 Waston expressed the plants being used and the poems selected worked in conjunction to convey the message. When the team had some difficulty stocking gladiolus, a plant that was part of the title of Newsome’s works, Waston drove a carload of gladiolus from Alabama to Philadelphia to use for the exhibit.

Another challenging aspect of the project were the sheds themselves. Alex Wayland said the sheds were not designed with basic 90-degree angles, making it a more difficult process to go from design to construction. 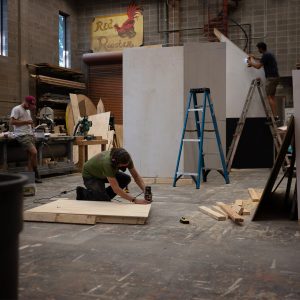 Chavers and Wayland worked with Jon Byler, manager of the Architecture, Planning and Landscape Architecture model shop. They “spent pretty much all of May working non-stop to get those sheds built,” Chavers recounted.

Once they were built, the sheds were loaded into a U-Haul that Chavers and Wayland drove to Philadelphia. Meanwhile, the rest of the team was in Philadelphia doing topography, mulching and laying out all the elements of the exhibit. 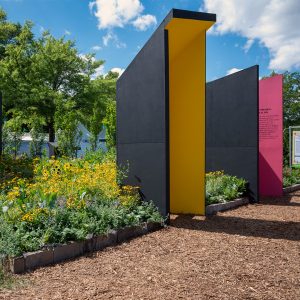 Additionally, the group focusing on plants monitored bloom times and made adjustments to the design as plant heights or the number of plants available changed in the days leading up to the show.

The PHS Philadelphia Flower Show ran from June 11 through June 19. The AU MLA team was awarded the 2022 Philadelphia Trophy: Best Use of Color with Flowering Plants. While that was an honor, more importantly, they were able to invite Effie Lee Newsome’s niece to see the exhibit.

“Her seeing and approving of it was easily the most rewarding part of the whole project to me,” Wayland said. “I think actually seeing it done⁠—that’s the best part. Everything before that it’s, you know, a lot of work.” 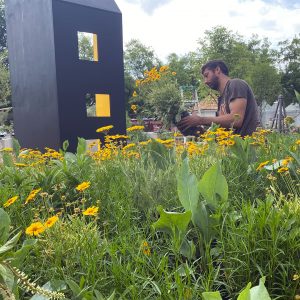 Once the flower show opened, some of the team members were able to stay and see attendees engage with their exhibit.

“You see all these pictures of people reading these columns and looking through these windows—it’s really cool to see that; that doesn’t really come through in a conceptual design or drawing,” Dustin Elston said.

Wayland said they may have spent months and months on this project, but it is unfortunately only going to stay for about a week. It’s fleeting, but it was also a lot accomplished in a short amount of time, he said

“Participating in the show, in general, was very valuable,” Wayland said. “We’re (one of) the only group(s) of students to ever be invited in the show’s 150-year history. It’s a lot of really cool benchmarks that we got to hit.”